Abby Parsons and Bridie Wilkinson are the co-founders of Dear Damsels, a website featuring writing by young women which launched in January 2016. Each month, they choose a theme such as HOME or TRANSIT and feature essays, short stories and poems on that theme. For July, Team DD is discussing NERVE.

THE FEM: So to start, could you describe Dear Damsels? Where did the idea come from and how did you go about making it into a reality?

ABBY PARSONS: We describe Dear Damsels as an online platform for young female writers, or a writing collective. We basically wanted to create a space on the internet that was specifically for young women to share their writing with others. We’d both had blogs that we struggled to publicise in any way (and besides, weren’t really sure that we wanted anyone to even know about them…) and so we knew that there were a ton of bloggers, writing into an oblivion, looking for some way to connect. Writing for Dear Damsels is a way to share your writing, stories and thoughts with other likeminded readers – it’s a community for all those amazing creative gals out there doing great things with words on the internet. Bridie and I met through work (in publishing) and after I heard Bridie had just published a short story, I sidled up to her with a vague idea about an online place for young women to write, read and share stuff. A few meetings later, we’d come up with a name, bought a domain and were knee-deep in basic HTML.

THE FEM: Once you had this idea for a website and had gone through all the steps of creating it, how did you go about it finding writers and an audience? And along those lines, was there a moment where you started to think, “Okay, this is a real thing now”?

BRIDIE WILKINSON: Initially we drew up a list of our friends, colleagues and connections who we thought would be interested in Dear Damsels. Our initial email to them explained why we set up the website and the vision we had for it, and invited them to share it with anyone else who would be interested. Luckily, that was quite a few people and we ended up with a core mailing list who we were then able to send the FIRST EVER DD Monthly Letter to, calling for submissions. We also shared with them the work-in-progress website and Twitter and Instagram, which we were already on, cultivating an online presence (albeit a small one!) and letting people know what we were about. 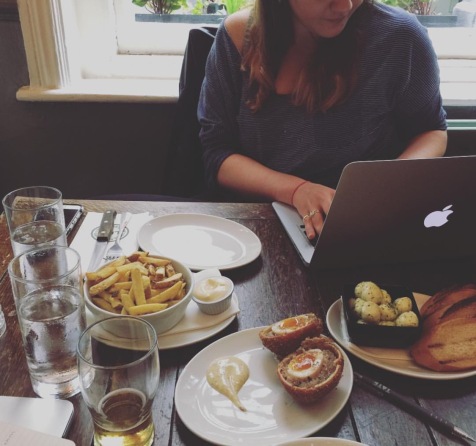 We launched on the 4th January this year (after a very, very early morning meeting fueled by coffee) and the response was a little insane. People who were already in the know retweeted it, which then got retweeted, and retweeted again…I think we gained something like 100 followers that first morning! We also got featured on BookBrunch, tweeted about by some of our favourite writers and followed by agents, publishers and authors alike. I remember finding Abby at lunch and feeling a little delirious. I would say that would have been the ‘Ok, this is a thing’ moment – after 4 months of planning, we had done it: we had launched the site we cared so deeply about.

THE FEM: That’s awesome!  I’m so impressed. So for those of our readers who aren’t familiar with DD and haven’t been following it, which pieces would you recommend people read to show them who you are and what you’re doing? Do you have any favorite pieces you’ve run, or even, ones that particularly surprised you?

ABBY PARSONS: Ooh, good question! The great thing about DD is we will happily accept pretty much any kind of writing, as long as it fits the theme, is easily sharable, and is something we know will hit home with our readers – which means we have seen all kinds of writing, and have loved it all! So, from beautiful, relevant poetry to short stories, to creative non-fiction, to slices of poetic prose that you couldn’t really fit into one genre…It’s all about sharing aspects of our collective experience. I [Abby] have a particular soft spot for a short story in two parts by Lucy Cuthew (‘The Night Train’), and am a big fan of what Alizée Chesnoy does with words – mesmerizing creative non-fiction that reads like fiction. We are lucky enough to have loads of regular writers which we are so grateful for, and I guess what has surprised me most is the amount of people who write in saying ‘this is the first time I’ve shared my work anywhere’ and yet it’s just so good!

BRIDIE WILKINSON: I always get extremely excited by the poetry that gets sent in to DD – as a very nervous poet myself, I am in awe of our writers who are willing to donate  some of their stanzas to us. Particular favourites include Emma Jenning’s wordplay in ‘Unspoken Word’ and I absolutely adore Montie Hanna’s style – her first pair of poems she wrote for us, All Good Things Come To An End/York Cafe show you her unique approach to poetry.  I also love it when writers are brave enough to be funny (as funny is a very hard thing to write!) Emma Figg’s hilarious personal account of language in Word Up makes me laugh each time I read it.