While culturally we agree that adolescence ends when our teenage years do, the feelings associated with that time don’t leave us completely. Post-college graduation, the start of a new job, or the end of a significant relationship can make what we consider “adulthood” feel more like our awkward teenage years. We expect teens to feel things deeply, and the angsty slamming of doors is chalked up to puberty and raging hormones. But once you hit your early twenties, you feel pressured to at least appear that you have things figured out.

Those of us in the midst of this era know that having it together is just that–an appearance. In reality, the transition to adulthood does mirror the uncertainty of early teenage years. Mitski Miyawaki introduces the idea of a second adolescence with the title of her new album, “Puberty 2,” released June 17, 2016 on Dead Oceans. Through her precise, addictive melodies, Mitski explores the reality underneath this pressure to seem put together. Mitski, along with other young artists, offer their nuanced experiences of early adulthood through thoughtful arrangements, leaving listeners with anthems to lean on in the struggle of growing up.

The Internet’s vocalist, Sydney Bennett–better known as Syd–is in the midst of early adulthood at twenty-four. In “Under Control,” she sings directly to her band, as she mentions in their NPR Tiny Desk concert: “I woke up impatient and anxious/ chasing dreams in my sleep.” Syd lives in the in-between–she mentions in “Get Away” that she still drives her old car and lives at home, but in the same track, she sings about a “life of luxury” with the confidence of a full-blown adult with a swanky apartment.

In a 2012 interview with LA Weekly, Syd said she came out in the band’s music video for “Cocaine” partly because of the lack of openly gay female artists in music. Four and a half years and a Grammy nomination later, the Internet remind us we can find our own versions of success without having it all figured out.

END_OF_DOCUMENT_TOKEN_TO_BE_REPLACED

Xandra Robinson-Burns is an American blogger living in the United Kingdom. Her blog, Heroine Training, focuses on ways to live life to your best potential through literature. She offers a course in self-development focusing on lessons from Harry Potter called Blogwarts, and a mailing list focusing on wisdom from Jane Austen called Letters from Jane Austen. She is just now finishing conducting a course in self-improvement based on Broadway musicals called Leading Lady.

THE FEM: Would you mind telling me a little bit about yourself and Heroine Training? Why did you start it and what niche did you hope to fill?

XANDRA ROBINSON-BURNS: I’m Xandra. I’m a minimalist Gryffindor from Boston living in Edinburgh. At Heroine Training, I write lessons and courses about being your own heroine and living your story.

END_OF_DOCUMENT_TOKEN_TO_BE_REPLACED

We were recently reviewed by Maxine Marshall of The Review Review.

The bar is certainly high here, as all of the pieces in The Fem were well-honed, challenging and formally innovative. I will certainly continue to follow this journal with interest; it’s an invigorating read.

We are so appreciative of Maxine taking the time out to review us, and for the extremely thoughtful review! Thank you so much to Maxine & The Review Review.

END_OF_DOCUMENT_TOKEN_TO_BE_REPLACED

Bethany Rose Lamont is the founder and editor-in-chief of Doll Hospital, a biannual art and literature print journal on mental health. The first issue, backed by Kickstarter, was released in February 2015. Issue three comes out this August.

THE FEM: Tell me a little bit about Doll Hospital for our readers. What is it, how did it come about?

BETHANY ROSE: Doll Hospital is an art and literature journal for and by people with mental health struggles. It’s not just for those of us with fancy liberal art degrees or some kind of “established” art or writing career or whatever. It’s a space for everyone who has a difficult time with mental health to share their story in whatever medium they feel most comfortable expressing themselves in.

A post shared by Doll Hospital Journal (@dollhospitaljournal) on Dec 4, 2015 at 1:29am PST

I founded Doll Hospital in May 2014, I was a 22 year old student and struggling with thoughts of suicide. I had no place to express these always overwhelming, and sometime terrifying, thoughts and found myself reduced to self deprecating tweets and 3am shitposting on tumblr. I’m 25 now, Doll Hospital has turned two years old and we’ve just completed our third issue. I of course still have mental health struggles (those things don’t miraculously disappear sadly!) but in cultivating a space to safely express myself and seek out a community with others who are also grappling with these issues, I feel more confident in managing my own mental illness, less ashamed to actively express when I’m having a bad day and more emboldened to advocate for myself and for my loved ones.

END_OF_DOCUMENT_TOKEN_TO_BE_REPLACED

Teow Lim Goh’s collection of poems imagines the lost stories of the women detained on Angel Island’s Immigration Station, as well as of their families, staff, and of those involved in the 1877 San Francisco Chinatown Riots. Decades after the Immigration station closed, poems were found written on the walls of the men’s barracks sharing their thoughts, documenting their experiences, and giving voice to their journeys. Unfortunately, those of the women’s were destroyed in a fire that burned down their barracks and, ultimately, erased their words. As Goh shares with The Fem, she blends “fact and fiction, politics and intimacy” to give voice to their tales so that others may finally hear their stories.

END_OF_DOCUMENT_TOKEN_TO_BE_REPLACED

Abby Parsons and Bridie Wilkinson are the co-founders of Dear Damsels, a website featuring writing by young women which launched in January 2016. Each month, they choose a theme such as HOME or TRANSIT and feature essays, short stories and poems on that theme. For July, Team DD is discussing NERVE.

THE FEM: So to start, could you describe Dear Damsels? Where did the idea come from and how did you go about making it into a reality? END_OF_DOCUMENT_TOKEN_TO_BE_REPLACED

“The abuse that happened is not the only part of the person…that certainly shapes who they are, but doesn’t define who they are” as said by Josie Torielli, a licensed clinical social worker from the New York City Alliance Against Sexual Assault, in a podcast episode for Social Work License Map’s #WeStandUp: Social Workers for Survivors of Sexual Assault campaign. In the podcast, Annie, a childhood sexual assault survivor, shares her story with Josie and tells the process she took to find the support she needed for recovery.

Annie’s story shows the importance for survivors to “reclaim” the narrative as it helps absolve the guilt that too often plagues them, dispelling the stigma of victimization. Reclaiming the narrative is a useful step for survivors to take, but it isn’t always an easy one. The trauma of sexual assault may lay dormant for years, emerging only to expose survivors to skepticism and even scorn from the people around them.

With the mission of empowering survivors of sexual assault, #WeStandUp examines and highlights the role of social workers in helping survivors overcome the trauma experienced from sexual violence and assault. Social workers provide a unique and valuable impact on the healing and empowerment of survivors of sexual assault as they help them move forward in their lives.  It is imperative that they not only offer their clients the resources and services that they need, but also nurture the hope of recovery. 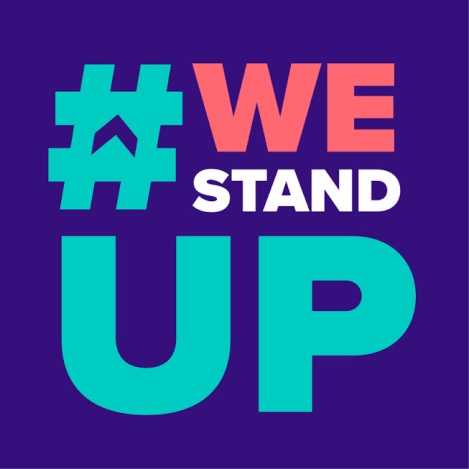 END_OF_DOCUMENT_TOKEN_TO_BE_REPLACED

C. Russell Price is a genderqueer poet based in Chicago but originally hailing from Virginia. Their chapbook Tonight We Fuck The Trailer Park Out of Each Otherwas published by Sibling Rivalry Press on June 21, 2016. Previous publications include: Assaracus, Court Green, Glitterwolf, MiPOesias, Weave, and elsewhere. They currently work at The Offing, Story Club Magazine and Triquarterly. They are a 2015 Lambda Fellow in Poetry.

END_OF_DOCUMENT_TOKEN_TO_BE_REPLACED

The yoga instructor dims the lights for shavasana, corpse pose. It’s my first time in her class and I already know that I will never take another class from her. I try to let go of my frustration and let my limbs sink into the mat, paying close attention to my breath, reminding myself that it’s almost over.

From the pattern of her footsteps, stopping at each mat down the line, and from the sudden citrus smell, I gather that she’s going to each person and rubbing something onto them. I’ve experienced this in yoga classes before. The instructor comes around to anoint each forehead with oil, or places her hands on our shoulders. Usually, I enjoy this. I find the touch of hands soothing; it gives the moment a holiness, a specialness. END_OF_DOCUMENT_TOKEN_TO_BE_REPLACED

Poets, poetry editors, and lovers of poetry – we’re having our long-awaited poetry chat!

Join our staff + editors of awesome places like Nat. Brut, TAYO Literary Magazine, Crab Fat, and Canthius as we talk poetry, craft, community, and feminism & diversity in the poetry world on Thursday, July 21, from 8-10pm EST.

The chat will take place on Twitter using the #FEMPOETRY.

And, to our fellow magazines + journals – we’d love to have you join us for the planning + development of this chat. The more voices at the table, the better. Email us at thefemlitmag(at)gmail(dot)com if you’re interested, or just have any feedback you’d like to share.

We hope to see you there!